Fore River and Back Cove 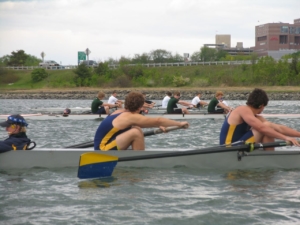 The Fore River is a short, horn-shaped estuary, approximately 5.7 miles long, that forms the boundary between Portland and South Portland. The Fore River is host to Portland Harbor, and many of Casco Bay’s port facilities rim this estuary, which begins just southwest of Portland at Stroudwater Village, where several creeks converge, and where a large remnant tide mill remains next to Outer Congress Street. 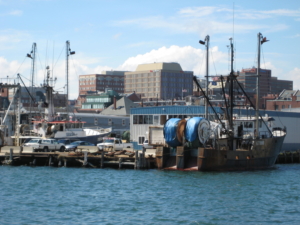 Long Creek is a meandering stream with four primary branches. Long Creek’s headwaters originate in Westbrook, from where it flows through the Maine Mall area of South Portland. Its several branches join together and flow into Clark’s Pond, along with Red Brook. Clark’s Pond waters then flow into the Fore River, and ultimately into Casco Bay. Years of urbanization have significantly impaired Long Creek’s health, as well as its ability to support recreation and wildlife, such as brook trout and the rainbow smelt with spawn at the outlet of Clark’s Pond each spring (in declining numbers). A primary cause of the stream’s degradation is increasing volumes of stormwater runoff – and the various pollutants associated with it – flowing into its waters from impervious areas such as parking lots, roadways, and rooftops. As a result, Long Creek no longer complies with state and federal water quality standards and is classified as one of 31 “urban impaired” streams in Maine, along with most of the other streams that flow into the Fore River. State and federal law require that Long Creek be restored to meet water quality standards.

Back Cove, once a complex ecosystem of tidal marsh and tidal mudflats that extended to Deering Oaks Park, is today the site of commercial and residential developments.   Fringing salt marsh rings the western shores of the Cove, and several small creeks feed into this estuary from the adjacent uplands.  At low tide, extensive mudflats host shellfish, worms, and their predators including wading bird and waterfowl.

Long Creek Watershed Management District
The mission is to develop and implement a cost-effective, environmentally-responsible, and equitable plan for restoring and protecting Long Creek and its watershed.
35 Main Street, Windham, ME 04062
(207)892-4700
http://www.restorelongcreek.org/