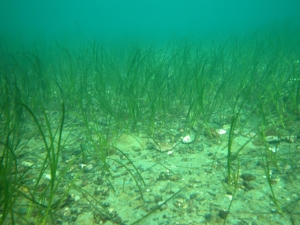 Due to its wide tidal variations and varied underwater topography, Maine has the most extensive intertidal habitat (the area between high and low tides) found along the U.S. Atlantic Coast. Salt marshes along Casco Bay’s edge provide critical habitat for wildlife, filter stormwater from upland development, act as buffers during storms, and reduce damage from flooding.

Below the low-water line, subtidal habitats abound with plant and animal species. Eelgrass is a particularly valuable submerged aquatic plant. Sensitive to water quality changes, eelgrass is considered an indicator of ecosystem health. Casco Bay has historically had the largest concentrations of eelgrass beds mapped along Maine’s coast: more than 8,000 acres. Scientists are currently investing the cause of recent losses of eelgrass beds in Maquoit and Middle Bays. 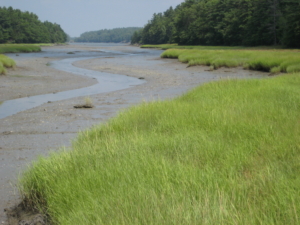 Casco Bay’s rocky shores are home to plants and animals like seaweeds, barnacles, crabs, starfish, and seals. Colonial nesting sea birds can be sighted on many of the Bay’s more than 750 islands, islets, and exposed ledges. Upstream from Casco Bay, the watershed boasts more than 1,350 miles of rivers and streams and many lakes. These freshwater systems support a variety of fish species like alewife, trout, perch, and pickerel, as well as birds and mammals. 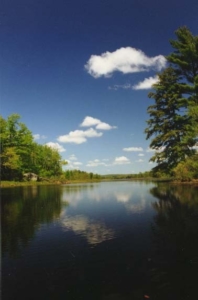 Upland forests throughout the watershed provide habitat for Maine’s native birds, fish and mammals. Certain species, including large herbivores and predators such as hawks and bald eagles roam over large areas of forest, and thus cannot survive in the small forests found in suburban areas. Many warblers and other migrant songbirds are forest specialists, nesting successfully only in large blocks of forest. While the Casco Bay watershed is still largely forested, forest interior habitat may be in short supply.