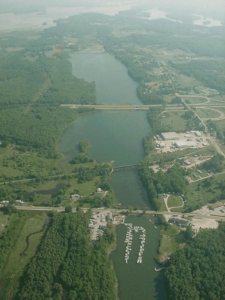 This region includes the New Meadows River and southwestern Phippsburg to Cape Small. The New Meadows River is located in the northeastern corner of Casco Bay in Maine.  Its 23 square mile watershed includes parts of five towns: Phippsburg (46 % of total watershed area), West Bath (33 %), Brunswick (11 %), Harpswell (11 %), and Bath (1 %). While the total population of the five municipalities surrounding the New Meadows is close to 40,000, the number living in the watershed itself is estimated to be less than two thousand, making it a relatively undeveloped area within the more densely settled Casco Bay region. However, second home owners and seasonal visitors are not counted in this estimate.

With very little fresh water flow, the New Meadows is not technically a river, but rather an embayment – a long, narrow projection off Casco Bay.  Salinity levels in the New Meadows Lake and River are close to that of the ocean.  The New Meadows’ rich glacial sediment and varied topography support a wide variety of plant and animal species, and its shellfish beds are known for their high productivity.

While water quality is generally good in many parts of the River, the northern areas and Lakes consistently exhibit some of the lowest dissolved oxygen levels in Casco Bay.  This is exacerbated by high nutrient levels and associated algal blooms.  Low dissolved oxygen episodes during warmer months can exacerbate periodic fish kills such as the infamous menhaden die-off of the early 1990s.

Much of the River and its shellfish growing areas are safe for harvesting and consumption.  However, actual and potential sources of bacterial contamination often cause a substantial portion of the shoreline to be closed to shellfish harvesting.

Testing for toxic metals and chemicals in lobsters, mussels, and sediments has shown that, with only a few exceptions, levels of these contaminants in the New Meadows River are good.

Long valued for its natural beauty, recreational opportunities, and productive shellfisheries, the New Meadows is a vital resource to all those who live, work, and play in the watershed.  Despite the small size of its shellfish flats, the New Meadows River produces an estimated 7.5% of Maine’s entire soft-shell clam harvest.  Quahogs are also commercially harvested, and American oysters are raised at aquaculture sites in the River.  The New Meadows’ productive shellfish beds support the local economy, providing jobs for more than 200 commercial diggers.

The New Meadows is a significant recreational asset in the region, offering opportunities for boating, swimming, sight-seeing, and angling.  Public access to the River is provided through a boat launch and marina. 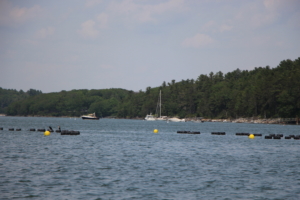