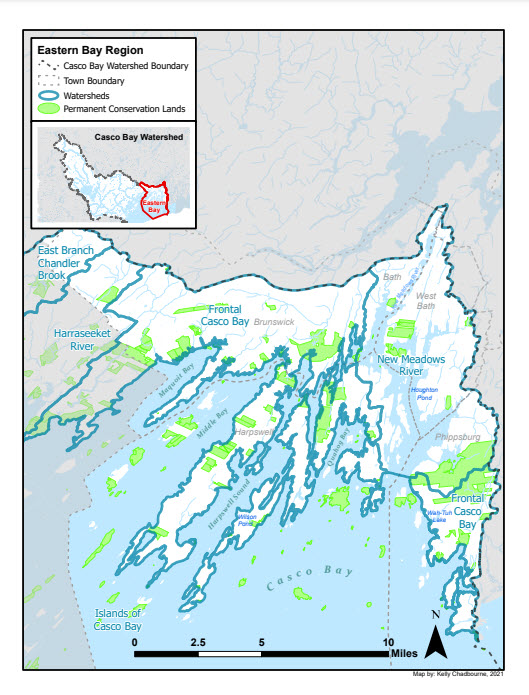 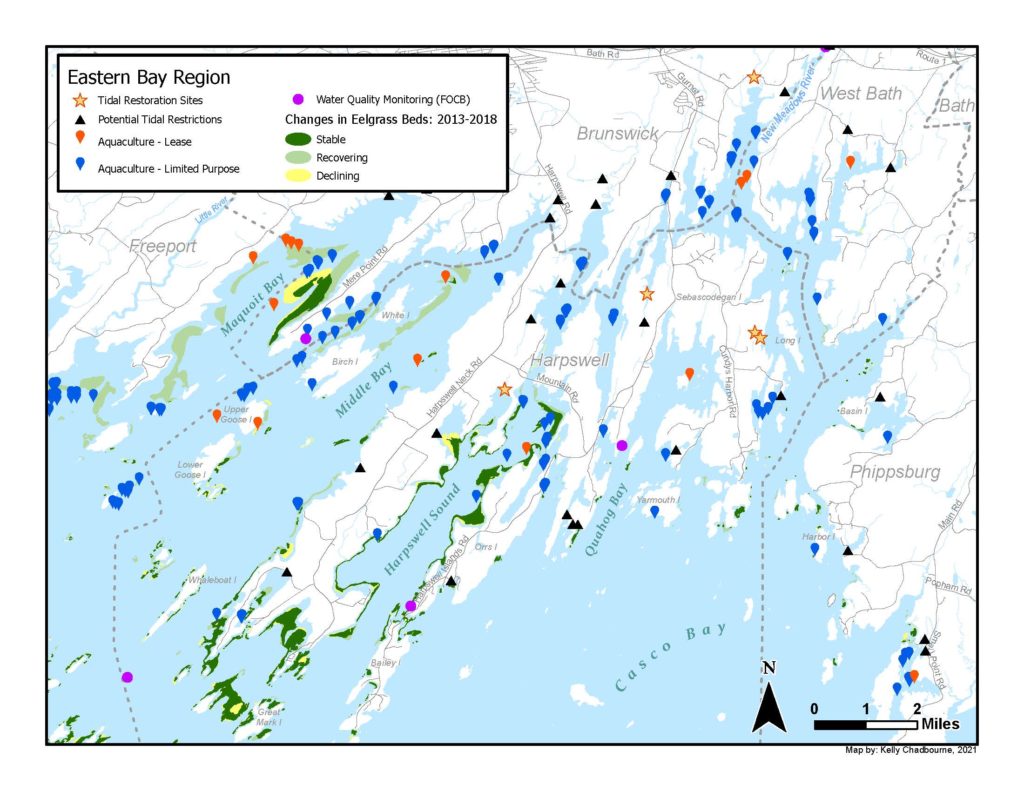 This region includes the New Meadows River and southwestern Phippsburg to Cape Small. The New Meadows River is located in the northeastern corner of Casco Bay in Maine.  Its 23 square mile watershed includes parts of five towns: Phippsburg (46 % of total watershed area), West Bath (33 %), Brunswick (11 %), Harpswell (11 %), and Bath (1 %). While the total population of the five municipalities surrounding the New Meadows is close to 40,000, the number living in the watershed itself is estimated to be less than two thousand, making it a relatively undeveloped area within the more densely settled Casco Bay region. However, second home owners and seasonal visitors are not counted in this estimate.

With very little fresh water flow, the New Meadows is not technically a river, but rather an embayment – a long, narrow projection off Casco Bay.  Salinity levels in the New Meadows Lake and River are close to that of the ocean.  The New Meadows’ rich glacial sediment and varied topography support a wide variety of plant and animal species, and its shellfish beds are known for their high productivity.

While water quality is generally good in many parts of the River, the northern areas and Lakes consistently exhibit some of the lowest dissolved oxygen levels in Casco Bay.  This is exacerbated by high nutrient levels and associated algal blooms.  Low dissolved oxygen episodes during warmer months can exacerbate periodic fish kills such as the infamous menhaden die-off of the early 1990s.

Much of the River and its shellfish growing areas are safe for harvesting and consumption.  However, actual and potential sources of bacterial contamination often cause a substantial portion of the shoreline to be closed to shellfish harvesting.

Testing for toxic metals and chemicals in lobsters, mussels, and sediments has shown that, with only a few exceptions, levels of these contaminants in the New Meadows River are good.

Long valued for its natural beauty, recreational opportunities, and productive shellfisheries, the New Meadows is a vital resource to all those who live, work, and play in the watershed.  Despite the small size of its shellfish flats, the New Meadows River produces an estimated 7.5% of Maine’s entire soft-shell clam harvest.  Quahogs are also commercially harvested, and American oysters are raised at aquaculture sites in the River.  The New Meadows’ productive shellfish beds support the local economy, providing jobs for more than 200 commercial diggers.

The New Meadows is a significant recreational asset in the region, offering opportunities for boating, swimming, sight-seeing, and angling.  Public access to the River is provided through a boat launch and marina.

Encompassing the watershed for numerous embayments and coves, including Harpswell Sound, Quahog Bay, Potts Harbor, Long Reach, and Ridley Cove, this region is composed of land contiguous with the rest of Cumberland County, including Harpswell Neck, as well as three large islands connected by bridges: Sebascodegan Island (locally known as Great Island), Orr’s Island, and Bailey Island and over 200 smaller islands. Harpswell has about 216 miles (348 km) of coastline and makes up one third of the shoreline in Casco Bay.

The glacially influenced, north/south oriented landscape creates many pockets of tidal marsh and tidal mudflat that support a broad range of fish and wildlife, including shellfish.

Collectively, this region has long been a regional and statewide focus area for conservation due to the unique combination of peninsulas, islands, tidal marsh, intertidal mudflat, and eelgrass beds that supports a range of fish and wildlife, including shellfish, waterfowl, and wading birds. Small creeks such as the Little River, and Miller Creek provide spawning habitat for rainbow smelt and other sea run fish. Eelgrass beds in this region have historically been among the most significant and extensive in the State. However, Bay-wide mapping of eelgrass beds in 2013 documented widespread loss in eelgrass cover in Maquoit and Middle Bays, which primarily seems to have taken place in 2012. While European green crabs are believed to be the primary cause of this decline, and green crab populations are known to fluctuate annually, resource managers hope that eelgrass beds can recover through a combination of natural revegetation and, if necessary, transplanting.

Quahog Bay Conservancy
The mission of the Quahog Bay Conservancy is to revitalize the ecosystem of Quahog Bay to a robust and resilient state for all communities that depend on it. Through sustainable aquaculture, ecosystem monitoring, and community education, we aim to conserve natural habitat, protect native wildlife, foster environmental stewards, and support Maine’s working waterfront.
286 Bethel Point Road
Harpswell, ME 04079
(207)522-1105
https://quahogbay.org/